Towards the end of May, Mark enjoyed a trip to Slovenia, as part of the RIOTE3 project. Travelling overland from South Somerset to Ljubljana had both its joys (including a breath-taking journey through the Austrian and Slovenian Alps) and challenges (delayed, diverted and cancelled trains). 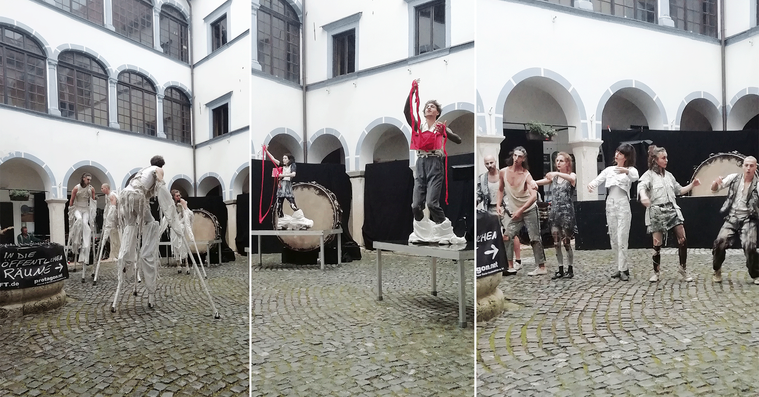 The second day focused on performances in the atrium of the Castle of Sevnica near a rural village bearing the same name. Partners from all the participating countries, as well as members of the public, enjoyed Fugue in Me minor, a new show presented by Teatro Nucleo from Italy; KlimaX performed by Antagon Akion Theatre from Germany; and walkabout clowns from Une idée dans l’air, France. 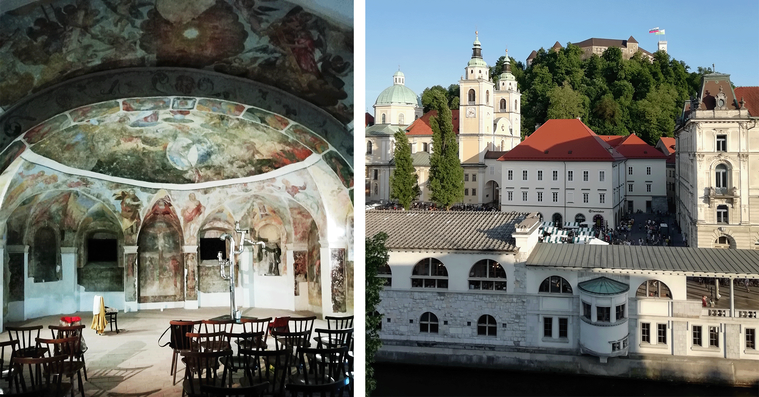 Ruritage held its final conference in June at the UNESCO buildings in Paris, attended by Mark, Ralph and Katy.  We were pleased to commission Liv Torc to write and perform a poem, ‘Enchanted Submarines’, at the evening cocktail event. Mark also composed and performed a Ruritage-inspired piano solo, which you can listen to below!

It was good to spend time with our European colleagues, several of whom we’ve not seen in person for a couple of years.

It felt very affirming to share the achievements of this 4 year project with all the partners, particularly as we witnessed a tangible increase in arts activity as the project developed.

Our involvement in Ruritage has confirmed that bringing arts and food together is a winning recipe. This combination of local food with the arts strengthens community cohesion, empowerment of people and joy for our audiences.

Danny, our Rural Touring Manager flew the Take Art flag at the annual National Rural Touring Forum conference in Buxton. It is a large event, bringing together a huge number of people working across the rural arts sector in the UK.

Holly Lombardo at the NRTF has a tremendous job every year rallying workers who are often part-time, working one or more jobs, and/or being carers and freelancers at the the same time.

We saw a number of showcases that were 'rural touring ready', and some that were still in development. The conference had a collaborative, creative and ultimately unifying feel to it. It was a welcome diary entry for people in the sector, who can feel like they are working in a bubble, often with large time-pressures, which doesn't allow much contact with colleagues across the country.

The NRTF is a wonderful organisation that works tirelessly to get funding, so people in rural areas can experience accessible arts at their best. It was great to be there to support them and to support colleagues across the UK.

Jennie and Jane were invited to Dunster Tithe Barn in West Somerset to celebrate all that had been achieved by the Early Years sector in a five year Opportunity Area Project. This was a unique opportunity for everyone involved to come together for discussion, enjoy beautiful food and hear from celebrated speakers - including our very own Jane! 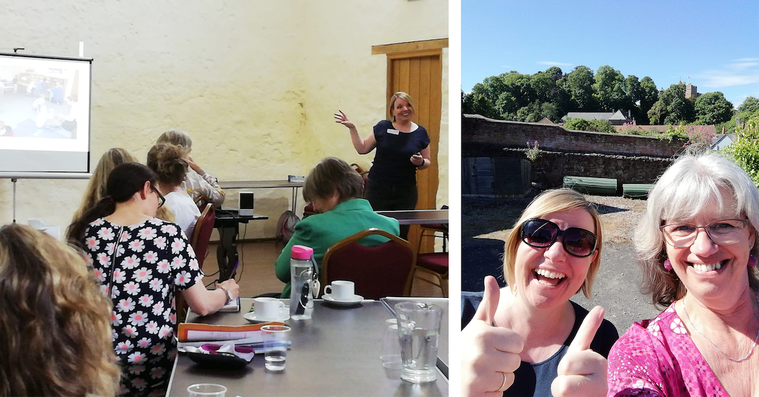 It was an absolute honour and pleasure to be invited to such a special occasion.

Jane's keynote focused on how we can best nurture very young children's innate musicality. She spoke from her own experiences of being an early years music educator involved in our Take Art SoundWaves Network SW programme. The second keynote by Leslie Patterson made us reflect on how best we can meaningfully support families in our work.

It was great to hear about the difference that the WSOA project has made to this area, and to connect - in person - with others working towards a positive start for young children.

At the end of June, again as part of the RIOTE3 project, Mark travelled to Pécs in Hungary for a partner meeting with his other European colleagues. Time was spent on project planning and evaluation, as well as visiting the recently purchased home of Géza, one of the project partners, situated in the rural hills above Pécs. The property includes a wonderful barn, which he hopes to convert into an office and base for rural touring in the area.

The visit coincided with performances that Géza had programmed at Pécsvárad Castle and the village of Cserkút, that featured Company Zid’s production of Routine. It was good to meet and watch acrobatic performer Said Mouhssine, especially after Mark and he realised they’d met each other before last year in Langport!

Learning together is a key feature of the Early Years Making & Believing project.  After every period of delivery in nurseries and preschools, the project team comes together to share experiences, reflect on themes, learn from each other and plan for 'what's next'.

The latest day was held at the Centre for Research in Early Childhood, Birmingham on 13 July 2022 and included both in person and virtual representatives from Derby Theatre, Surrey Arts, Take Art, Early Years Practitioners from settings who hosted the project, researcher Dr Susan Young and, of course, the skilled artists who visit settings to work with staff and provided a wonderful experience for the children.