Central to our approach was the shared understanding that all young children are competent, creative and display a range of musical behaviours. An important strand of the project was to observe and document these spontaneous behaviours. In order to do this, we supported adults to listen, recognize and value young children’s own ways of being musical.

This is a short film of EYPs (including university students on teaching placement) and MLs watching and reflecting on their filmed observations of children engaged in spontaneous musical play. At the heart of the sessions in the EY settings was a sense of collaboration and shared learning. MLs and EYPs would together plan, ‘deliver’, observe and reflect. 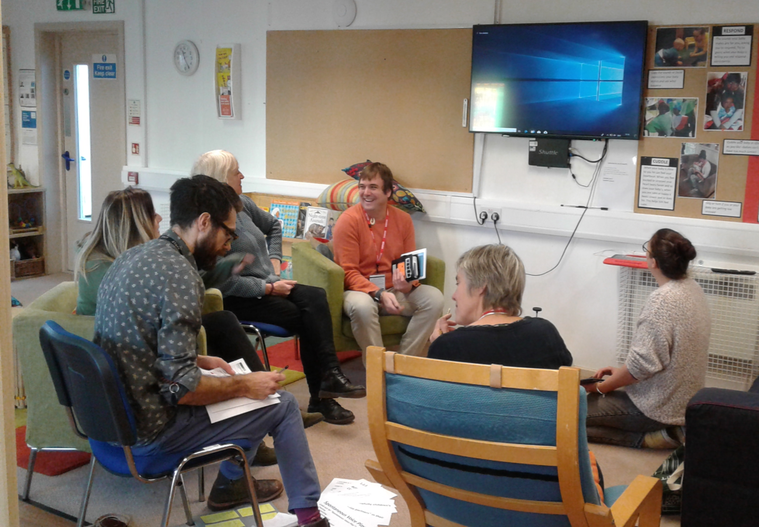 Time to reflect and document musical behaviour was very important throughout the programme. At the end of each half day session, MLs and EYPs would sit together to debrief. Discussions would include what spontaneous musical abilities the children revealed, how the children engaged with  musical activities (did they really achieve the intended musical outcomes e.g. keeping a steady beat, pitch-matching e.t.c?) and how might the MLs and EYPs best foster the children’s musicality. 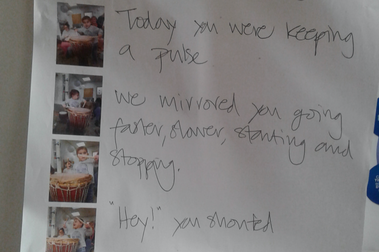 When MLs were not there, documentation by EYPs would continue throughout the week. Here are some examples of EYPs assessments of their children’s musical abilities on the staffroom noticeboard.

Children developed their musical ability with MLs and EYPs providing exciting and curious opportunities. They were offered sustained opportunities to explore musical play with adults.

This film shows an increased and sustained level of engagement from a two year old with a music-based provocation - in this case a guitar and a willing adult musical play partner. The child displays great pleasure at the turn-taking of the guitar he strums which is then mirrored by the ML. His pleasure at the sound is shared not only between the ML and child but also by the other children and adults in the space. The shared responses - the repeated gestures, guitar string sounds, word-sounds and silences - are all musical.  The ML communicates sensitively and allows space to create the music.

EYPs were encouraged to notice and capture spontaneous musical play. This film was taken by an EYP who noticed a child weaving music into her everyday play. In this example the child is spontaneously reproducing a known simple song she has heard the MLs singing earlier in the week - ‘Rain is falling down’. This film reveals the child’s ability to transform and rework a simple song, repeatedly chanting a phrase as she was scooping up and pouring rice in a tin. The MLs had encouraged and built on a song/ rhyme-rich environment in the EY setting.