During the project EYPs and MLs felt confident that music was a strong and positive vehicle with which to support communication, skills and empathy. They witnessed numerous interactions where children, particularly non-verbal or those with EAL, found new ways of communicating through musical play. Staff noticed behavioural changes with children being more considered about their interactions with adults and their friends, taking time to listen, respond and collaborate. Musical play sessions offered an enticing sound-rich environment where social interaction and expression could be explored.

This film shows children sharing, turn-taking and vocalising spontaneously with a microphone in their self-directed play. The microphone was left out as a provocation in their environment by an EYP who waited, observed and captured this footage. 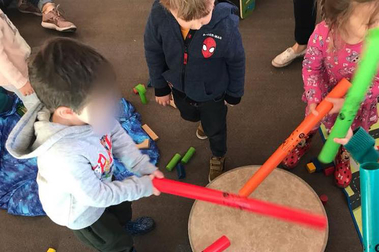 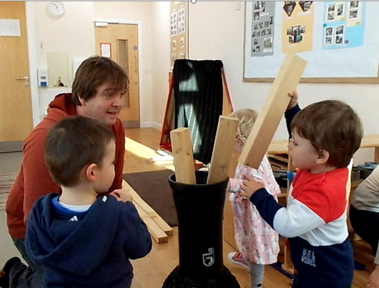 In these three photos, children were viewed as multi-modal beings. They were encouraged to use their imagination, think critically, explore and experiment, discover the impact of cause and effect, take risks, repeat and rehearse ideas (DfE, 2017). The children were able to effectively communicate using the instruments, well-chosen materials and resources in a variety of ways. The music became a mechanism to address issues of anxiety as they gained confidence and were valued as competent and capable creative beings. Staff began to value the children’s musical activities, which in turn led to the children’s increased expression.

This film shows a toddler communicating with an EYP in the chant ‘Rain is falling down’. Note the eye contact, mirroring and how the EYP takes her cue from the child. A recorded version of this song would have been no substitute, as it would not have waited for the toddler who paused, added directional language (up / down), whispered and finally crashed their hands on the table as he vocalised ‘down’. The toddler’s experience of communicating is abundantly multi-modal.

In these two examples, many children are communicating through musical play in two very different but equally busy EY settings. Both films show EYPs and MLs working alongside each other, all playing the role of the musical play partner. The children communicated in interesting and varied ways for substantial periods when partnered by an interested intuitive adult. These examples show how valuable it is to pick up the child’s ideas and reflect them back. By partnering children in their musical games, the adults extended the quality of musical communication.