For this outcome the word “environment” has been interpreted as more than the physical space, musical instruments or equipment in the EY settings. EYPs’ skills, confidence, perceptions of quality and opportunity have all been included in an assessment of what makes “a good quality and accessible musical environment”. EYPs and MLs reflected on how provocations are invited and more conscious of their role as adult partners in musical play. Most settings reviewed their provision and worked collaboratively to change, adapt, expand and refresh how music is utilised on a daily basis.

This film shows an enabling activity and approach - singing spontaneously to support the child’s needs. The baby in the blanket was new to nursery that morning. He had been dropped off by the parent and was distressed, crying and also tired. The EYPs chose to soothe the baby by singing a well-known song, spontaneously swinging the blanket slowly, quietly and gently side to side in time to the steady beat of the song – responding to the dynamic needed in the environment at that moment. The MLs (one playing guitar and the other filming and singing) improvise along, taking their cues from the EYPs. There is no directive leading. Instead there is much listening and tuning in.

Much thought was given to creating an inviting enabling environment with carefully chosen materials and resources. In this film, the ML has set out paper and crayons to encourage playful vocalisations. This was inspired by the findings from SALTMusic research report (2018). EYPs began to think carefully about creating immersive provocative, enabling, musical play spaces. Staff reflected on their role as willing adult play partners, following the children’s initiatives by mirroring, turn-taking or synchronising their gestures, sounds or actions. 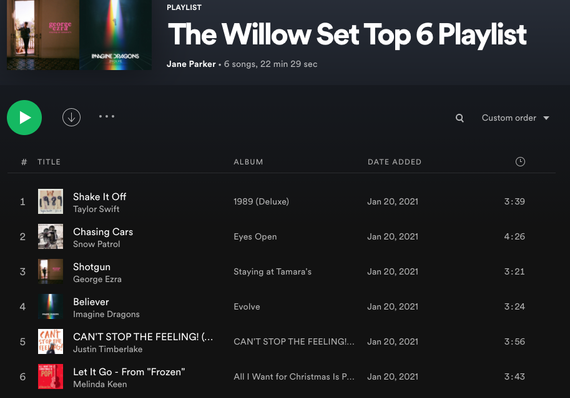 The project also considered the auditory environment of an EY setting. EY staff and EY music practitioners were asked to reflect on Burke’s research re the limited range of recorded music played in EY settings (2013) and the Tune into Listening resource (2017).  Staff were also asked to support and encourage active listening. They could see the benefits of offering their children rich and varied listening experiences. Some settings asked what recorded music was meaningful to the families of the children. This particular photo of one setting’s Spotify list shows the results of that question. Setting staff provided various opportunities to listen to recorded music including when parents and carers dropped off and collected children, when children could express themselves freely through movement, when mark making and at meal-times. Furthermore, we asked some setting staff what particular recorded music was meaningful to them and why. Answers included:

‘Sultans of swing’ - it always makes me think of my Dad as he would often play this record in the house. And only a few days ago he was dancing to it with my 7yr old daughter.

‘What a wonderful world by Louis Armstrong’ - I sing this song to my daughter every night.

‘Butterfly Fly Away by Miley Cyrus’ - this song is just gorgeous and is about the bond the child has with their dad. And my dad was my absolute rock when I had my child and I was at the time in an unhealthy relationship.

We then played their chosen recorded music tracks at Zoom training sessions they attended, in particular at the start whilst we were waiting for everyone to arrive - or coming back from a breakout room session. Needless to say, the individual EY practitioner’s reactions when hearing their chosen tracks were sometimes incredibly emotional. 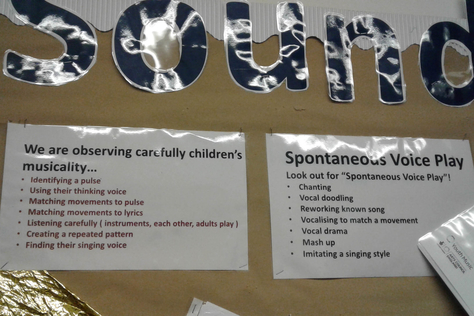 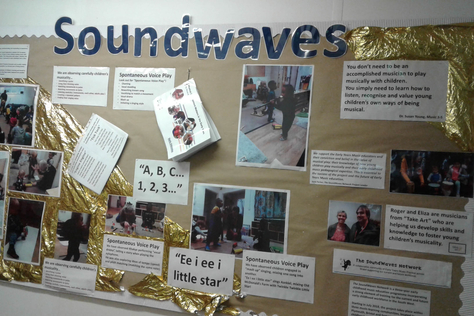 Some EY settings chose to display their learning via display boards positioned in corridors where parents / carers waited to collect their children. Note the wording on these display boards ‘spontaneous voice play’, ‘recognise and value children’s own ways of being musical’, ‘foster young children’s musicality’.